Birmingham, England Australia all-rounder Tahlia McGrath was allowed to play in the gold medal win over India in the Commonwealth Games women’s T20 cricket final on Sunday despite testing positive for Covid-19 only hours before the toss.

Australian officials issued a statement explaining that even though McGrath was positive and presenting mild symptoms, she was allowed to play following consultation with team and match officials along with the Commonwealth Games Federation Results Analysis Clinical Expert Group.

“McGrath presented to team management with mild symptoms on Sunday and subsequently returned the positive test,” said Commonwealth Games Australia (CGA). “She was named in the starting XI at the toss and the International Cricket Council (ICC) approved her participation in the final.

“In consultation with the CGF (Commonwealth Games Federation) and the ICC, Cricket Australia medical staff have implemented a range of comprehensive protocols which will be observed throughout the game and for post-match activity to minimize the risk of transmission to all players and officials. 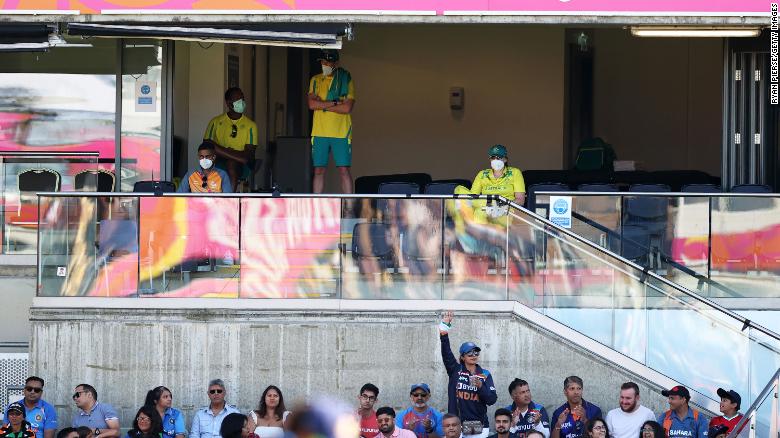 Tahlia McGrath looks on whilst wearing a face mask during the Cricket T20 – Gold Medal match between Australia and India at Edgbaston on August 7, in Birmingham, England.

The CGA did not outline what protocols were in place and would make no further comment.

“I think it was handled extremely well from Australia’s point of view,” said Australia batter Beth Mooney, her gold medal hanging around her neck. “Having protocols in place and making sure everyone on the team was comfortable she was playing, they did all the right things.

“Obviously towards the toss it became a bit hairy there for awhile but I think it’s no different if someone playing and they’ve got a cold or flu.

“From my perspective the right decision was made and we just went out and played it.

“It wasn’t something under our control, the people who are paid to make those decisions made them.”

McGrath did not line up with her team mates during the national anthems. However, she came out to bat without wearing a face mask.

She was Australia’s highest run-scorer in Birmingham coming into the final but against India she faced just four balls before being dismissed for two.

When McGrath exited the field, she did not return to the dugout. She sat apart from her teammates.

“It was unusual but we have our doctor on tour and we were just listening to whatever she said,” said Australia all-rounder Ashleigh Gardner. “She said it was safe for her to play, obviously we didn’t mingle with her so we all felt like we were safe enough out there.

“It was just one of those things that was bound to happen to someone in this competition and unfortunately it was her.”

Next post President puts onus on IMF deal to all parties, MPs

Novak Djokovic said he was bothered by a wrist problem during the Laver Cup in London and that his lengthy absence from the Tour recently could be to blame.

World chess champion Magnus Carlsen has for the first time openly accused fellow player Hans Niemann of cheating. In a...

Suryakumar Yadav and Virat Kohli struck half centuries as India beat Australia by six wickets in their third and final Twenty20 International in Hyderabad on Sunday to claim a 2-1 series win.

Kenya's Eliud Kipchoge shattered his own marathon world record, winning the Berlin race with a time of 2:01.09 to shave...

The United States Permanent Representative to the United Nations Food and Agriculture Agencies in Rome, Ambassador Cindy McCain will arrive...

Tall Black Taane Samuel has been banned for a month after testing positive for MDMA during the NBL basketball season.